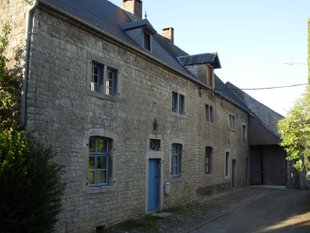 Crupet is a village of about 500 inhabitants who does not leave indifferent, for several reasons :

built heritage : a core of preserved dwellings (18th and 19th century) with a church and a castle from the 12th century, a presbytery of the 17th century, and the remains of mills (grain, oil, paper, ...) ;

the cave of Saint Anthony, built by the parishioners and inaugurated in 1903 ;

nature and landscapes : the possibilities of walks are countless among the woods, through the meadows or along streams ;

its particular history : until 1796 Crupet was an enclave of the Principality of Liège in the County of Namur ;

usability : many restaurants and regular animations are especially appreciated by tourists.

For those reasons Crupet is one of the « plus beaux villages de Wallonie » (most beautiful villages in Wallonia) since 20 years.

Crupet presents all the characteristics of a Condroz village, where valleys and ridges occur, mimicking a corrugated metal. The old natural stone dwellings alternate ochre sandstone  (excerpt of the ridges)  and grey limestone (excerpt of the valleys).

The most typical houses date from the 18th and 19th centuries Many contain vintage stones ; find them is an interesting and pleasant walk. The owner of the cottage can provide all the information on this subject.

Crupet's dungeon, listed as a monument and site since 1973, is recorded in the list of the remarkable heritage of Wallonia.

It deserves it well ! Indeed, it is quite difficult not to fall under the charm of this little castle, surrounded by moats and connected to the mainland by a stone bridge, replacing an ancient drawbridge. The entrance is preceded by farm buildings, in operation until the mid-20th century. This farm is easily visible from the garden of the cottage.

The history of this building can be summarized in 3 main stages :

building of the tower in rubble stone in the 12th century by the Crupet family, characterized by romanesque openings;

at the end of the 16th century, the Carondelet family adds a half-timbered floor, provides the tower with stairs and sets in it Renaissance windows; it also builds the farm, surrounded, at that time, by walls and small moats;

in 1925, after two centuries of abandonment, the architect Adrien Blomme purchases the property and converts it into a comfortable place; he closes some openings and adds new ones.

Recently, the castle was repurchased and work is undertaken in accordance with the Cultural Heritage Department, to restore its state of the 17th century.

Since this is a private property, the dungeon cannot be visited.

The church of Saint Martin is also listed. Like the dungeon, the early romanesque church, characterized by its impressive tower, dates back to the 12th century. It was enlarged in the 16th century (gothic chapel, new steeple, enlongated choir). The interior was then transformed in the 18th century (coffered ceiling).

The tombstones  to be found in the church are of great interest. The oldest dates back to the 14th century ; the most beautiful one, on the left in the entrance porch, is that of the Lords of Crupet , Guillaume de Carondelet and Marguerite de Brandebourg, deceased in the early 17th century.

The church, set on a mound and surrounded by its old cemetery, is inseparable from its secular linden. Very diseased a few years ago, it was the subject of attentive care and has now recovered.

A few steps from the church, the cave dedicated to Saint Anthony of Padoua is astonishing.

Its importance and "kitch" decoration are the explanation. Built entirely of stone and concrete by the parishioners, under the supervision of the priest Gérard, it was inaugurated in 1903 ; it has become since a very popular pilgrimage site. The priest promoter  is shown in prayer on the square and his body rests  in the back of the building. With the exception of 3 cast statues (the Devil, the beggar and the priest), all the statues are terracotta. The statue of the Devil weighs more than 700 kg.

Inside, there are 3 scenes representing the life of Saint Anthony : the miracle of the mule, preaching to the fish and the death of the saint.

But the "highlight" of the show is at the back of the cave, which is reached by a small internal staircase : Saint Anthony repelling the Devil. And eventually the Devil stole the show at the saint !

The cave is leaning against the fomer presbytery (17th century), also listed. It has recently been restored and houses now the Tourist Office of the municipality of Assesse (OTA).

Crupet is a land of stone, woods and ... water ! At the end of the garden of the cottage, two brooks (the Ry de Mière and the Ry de Vesse) meet to form the Crupet, a river which flows into the Bocq, at Bauche, 4 km downstream. On leaving the village, another brook (the Ry de Gense), flowing down from Durnal, joins the Crupet river.

These multiple steep brooks have given rise to numerous mills. The oldest written record dates from the 12th century. We know there were at least five mills or factories using waterpower in the 16th century.  : two flour mills, an oil mill, a forge and an explosives factory.  These last two factories will disappear in the 17th century. Around 1780, two paper mills will settle at 100 m from each other.

By 1800, there were eight mills of various sizes : four flour mills, a paper mill, sheet metal works, a hemp mill and an oil mill !

In the course of the 19th century, all of them will be turned into flour mills. The last one will shut down in 1945.

The most interesting remains are the big Purnode mill, near the cottage, turned into a steam mill in the 19th century, the former paper mill, now occupied by the Hôtel des Ramiers,  and the oil mill of the Rue du Comte.

If you want further information about Crupet, its history, its heritage, its inhabitants, ... please have a look in the book called  "Crupet, un village et des hommes en Condroz namurois" (800 pages !). This book is available in the  house; the owner has taken part in writting numerous articles.

Please also visit the web site CRUP'ECHOS, a biannual review written by  the inhabitant’s committee.  You will find numerous historic and touristic information, old pictures and a diary of events. 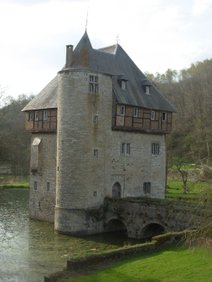 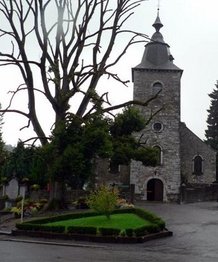 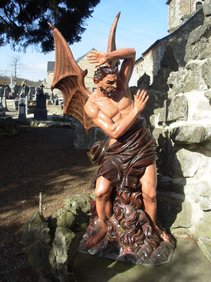 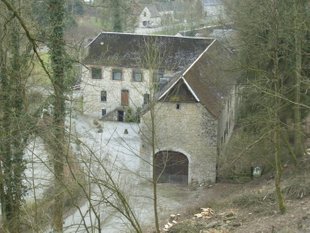