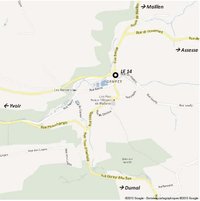 Crupet is a pleasant   village of 500 inhabitants located in the Condroz. It's ideally located in a very touristic region in the Namur – Ciney – Dinant triangle.  These three towns are located less than 20 km from Crupet ; the Meuse Valley is only 10 km away.  The Ardennes and Entre-Sambre-et-Meuse are close to Crupet. 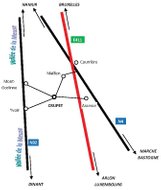 Coming from the South-West, head for the town of Dinant (Meuse valley), than Yvoir, where a road takes you to Crupet.

Crupet is not easily accessible by public transport.

However you can access by train choosing as stop either the  SNCB station Yvoir (line SNCB 154 Namur – Dinant), or that of Ciney (line SNCB 162 Namur – Luxemburg) :

From ther, you have to take the bus (line TEC 128) liking the SNCB stations Yvoir and Ciney (2 stops in Crupet) :

The sportsmen can use their bike starting from one of those two stations, or from the nearer SNCB station Assesse (line SNCB 162 Namur – Luxemburg).